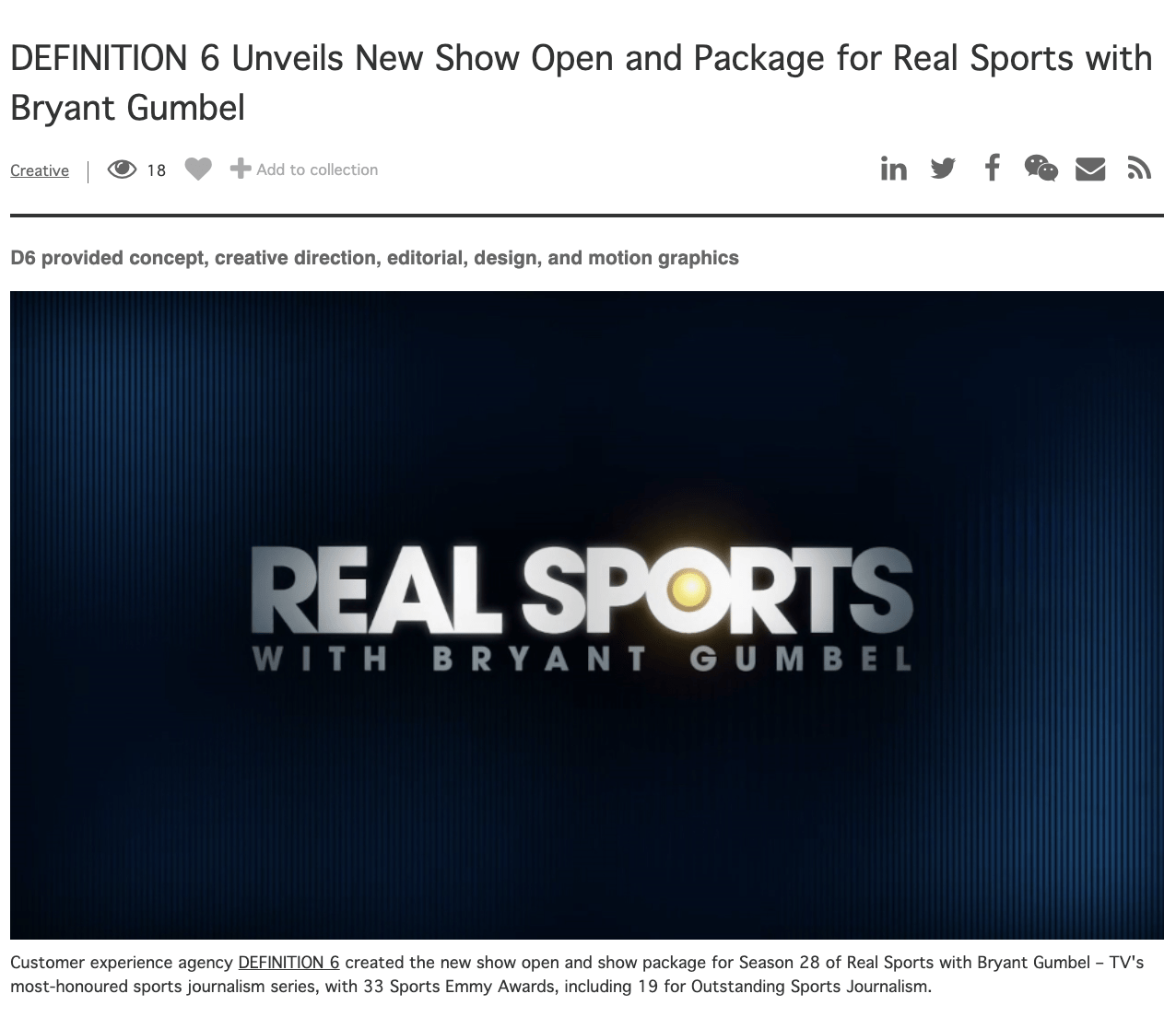 “We came to DEFINITION 6 with a very tall order – to create something modern, while leaning into the spirit of a 28-year-old journalistic identity,” says Jordan Kronick, creative director of Real Sports. “We’re extremely pleased with the result, and from executives and industry colleagues, the reviews have been overwhelmingly positive that the rebrand feels fresh, captivating, and elegant. So mission accomplished.”

In putting these pillars into practice, D6 created a modular motion graphics sequence for the open. Bookended by hero footage from the show’s most iconic stories spanning the sports spectrum, the middle section is reserved for HBO to highlight footage specific to each episode, with sound bites for all four lead stories, narrated by Bryant.

The video is framed by four vertical panels, which combine and transform in sundry arrangements before revealing the Real Sports logo. The same look can also be spotted in the Real Sports’ newly re-designed set with the four-panel treatment filling on-set screens during host segments.

Targeting a younger audience, with evidence that the highest rates of engagement on social happens within the first five seconds, D6 leaned into its data insights team to inform the motion language and editorial pacing of the sequence.

“The package was minimal by design, but definitely not by strategy or execution,” says Anthony. “The design needed to be seamless but also provide a user-friendly toolkit for the HBO team to reimagine with ease from episode to episode.”

“The stories need to shine, so our design reinforced the story as the hero in all cases,” adds Crystal.

The built-in challenge was shortening the existing open by nearly half, while creating a piece with a definite front, middle, and end. In addition to design, music pacing heavily dictated the transitions, both visually and tonally. Here, D6 worked with MassiveMusic, which rearranged and composed modern variations of the classic Real Sports theme song and involved a live string session in Amsterdam.

“In addition to the fully mixed scores MassiveMusic created, they also delivered countless stems of those sessions, which we organized into a music toolkit for HBO to be able to create a variety of remixes based on the tone of the material they are underscoring,” concludes Anthony.