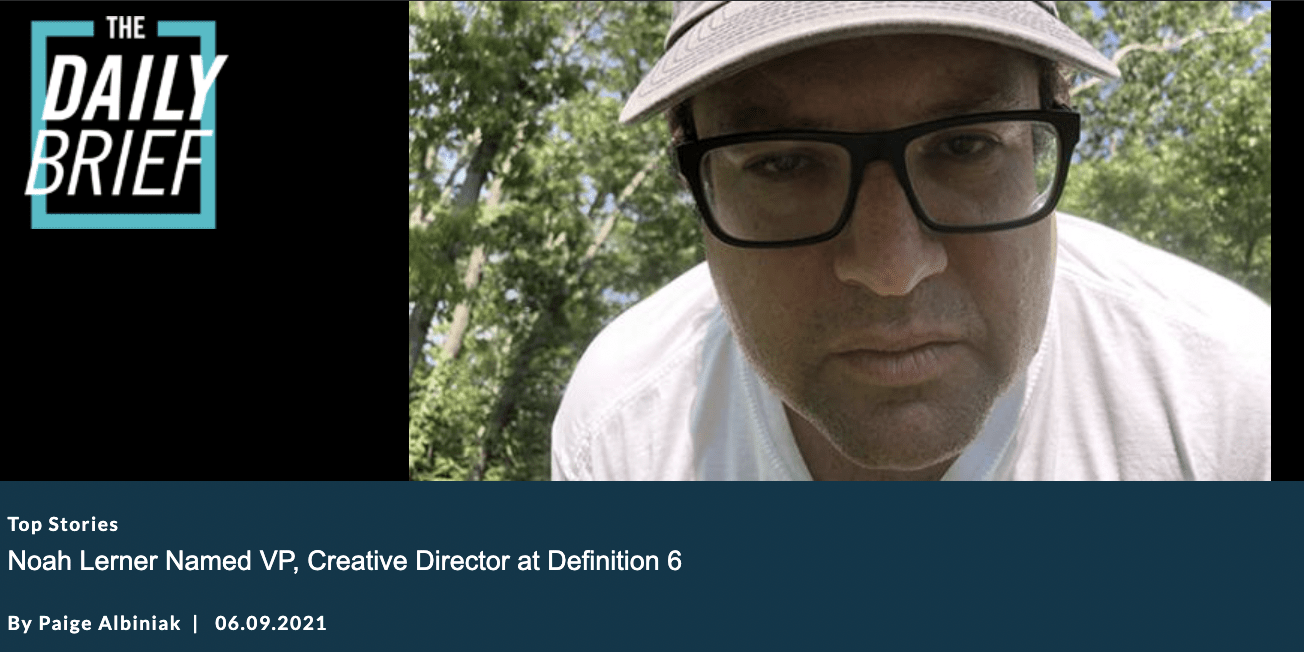 Noah Lerner has been named vice president and creative director at New York and Atlanta-based Definition 6. Prior to joining the customer experience agency, Lerner worked at CBS All Access (now Paramount+), Showtime and HBO.

“Noah is a rare, multifaceted talent and a perfect fit for the D6 team,” said Doug Dimon, senior vice president and group creative director at Definition 6, in a statement. Not only is he a triple threat who has written, directed, and produced original content, but he’s equally adept at entertainment marketing content. We know this because we’ve worked with each other since his days at HBO. We were lucky to have Noah as a client. We feel even luckier to have him on our team.”

“It was important to me to join an agency that values ideation and collaboration as much as I do,” said Lerner, also in a statement. “I thrive when I am creating amongst good people, and having worked with D6 through the years on the client side, I’ve gotten to know the phenomenal people and culture here, up close and personally. They have all of the leadership, talent, and capabilities for me to pursue what I love most as a creative, which is bringing a 360-degree perspective to helping clients find fresh ways to break through the clutter.”

Most recently, Lerner was a freelance creative director, writer, and producer at CBS All Access where he worked on launching the streaming service’s initial foray into the Champions League. Prior to that, he was creative director at Showtime, working on long-form sports content including its All Access documentary series on boxing.

During his 20-year tenure at HBO, Lerner brought his experience in marketing, filmmaking and sports together, holding a range of positions including associate creative director, writer, producer and director. In addition, he created on-air promos and trailers for Deadwood, True Blood, Real Sports with Bryant Gumbel and Inside the NFL. Lerner is also credited for his work on HBO sports shoulder programming, including Face Off, 2 Days and 24/7.

Lerner grew up with filmmaking in his DNA as the son of Oscar-winning documentarian Murray Lerner (From Mao to Mozart: Isaac Stern in China, Festival). He earned a master’s degree in film at Columbia University in New York City, and played collegiate sports at Pomona College outside of Los Angeles. He merged these two passions when he launched his career at NFL Films, working on documentaries, before joining ESPN as a director and producer. There, Lerner directed Big in the Mind, a documentary about street basketball legend Joe “The Destroyer” Hammond, which went on to win a NY Sports Emmy.

“I’ve been fortunate to have worked with and learned under some of the best and brightest people in our industry, but it all started with my father, who taught me to be fearless as an artist,” said Lerner. “It’s a quality that I have come to learn that both clients and my creative peers appreciate in our shared pursuit of telling stories that are authentic and impactful—and why I approach every project as an artist. It’s really not just a job. D6 brings that same level of fearlessness within their innovative agency model, so I look forward to what we can achieve together.”

Brands and Marketing in the Metaverse – Part 3: Community